By Search4scratchApril 21, 2017Uncategorized
No Comments

When Search 4 Scratch Documentary student Ian Leggatt was selected for the Search 4 Scratch Program he was desperate to improve his Chipping and Putting, he also had self belief issues which would manifest as choking at the end of a golf round.

No one can dispute that Ian has all the talents to be a good golfer. He used to play high level Tennis and his hand eye co-ordination and length off the tee is impressive.

Unfortunately Ian’s impatience was getting the better of him and was a contributor to his late round fade outs.

Another problem which is a big one for most amateur / social golfers is Ian did not have a lot of time to apply himself to practice, but very soon he realized he did not need to practice a lot to make some significant improvements.

Ian’s putting and short game improved considerably throughout the program and his patience is still a work in progress but heading in the right direction.

Search 4 Scratch Creator and CEO Andrew McCombe believes that Ian’s biggest improvement has been his openness (with initial skepticism) and understanding of the concept that your Physical Reality (eg your physical body and physical environment) is a reflection on your Internal Reality (eg your thoughts, feelings and beliefs) – For example when Ian did a Champion Mindset Session with Andrew relating to a sore foot that he thought was “just a sore foot” his view on life changed almost instantly – once he got to the root cause of the pain in the foot he soon realized that it was a family issue that he needed to address – which he did and has not had a sore foot since.

Ian’s improvements have inspired him to play in his State’s Mid Amateur Championships – something Ian says “he would never have considered with the short game he used to have”.

See more of Ian’s Search 4 Scratch journey by reading or watching his testimonies below. 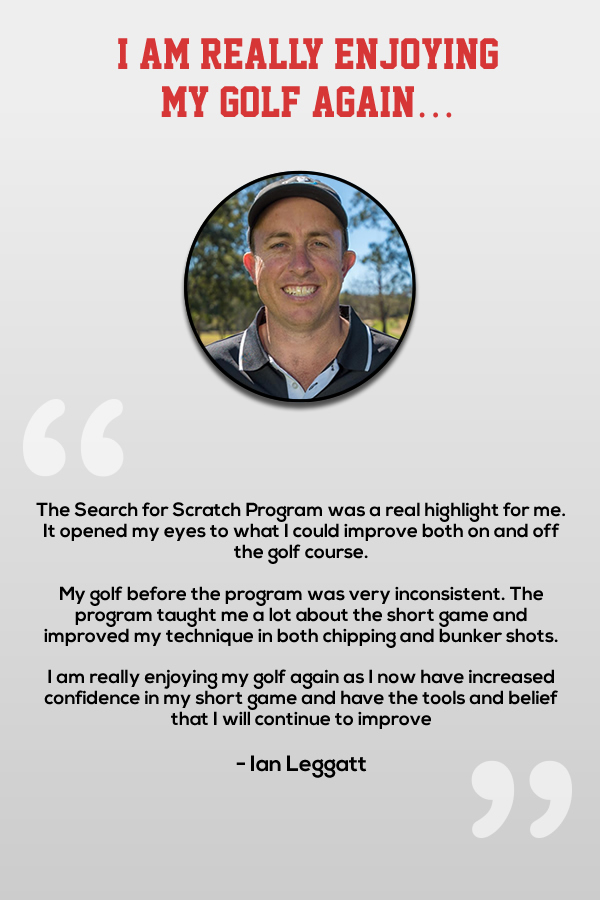