By Search4scratchApril 14, 2017Uncategorized
No Comments

The first big awakening happened for Travis on the first night of the first workshop when he was asked why he plays golf?

Travis was really committed to playing for his division one pennants team so he could play competitively but after assessing his personal values he soon realized the reason he plays golf was to hang out with his friends and travel to and experience new and inspiring golf courses – this realization allowed Travis to let go of his competitive desires immediately and refocus his golf direction on having fun and enjoyment, whilst travelling and playing golf.

It even lead to Search 4 Scratch Creator and CEO inviting Travis to be the cameraman on Andrew’s TV show Golf Getaway – a Golf Travel show.

Like all golfers who get clear on why they play golf this took a big load off Travis’s mind and gave him a lot more clarity as to how he wanted to be as a golfer from now on – the interesting part about this clarity though is that Travis’s performances have improved and he is well on the way to representing his pennants team at the same time.

Travis’s next transformation came as he learned some of the Champion Mindset tools – very quickly his mindset on the golf course changed as he now had resources to deal with any errant shots or unnecessary distractions.

But perhaps the biggest transformation came from Travis when he realized he brings so much more to golf than just his golf. After a number of conversations with the coaches Travis identified that his current lifestyle (both work, stress, health and fitness wise) was not conducive to where he really wanted to be as a golfer, a businessman, a husband and a father of 3 great kids.

During the 6 week gap between Workshop one and two Travis undertook a training and diet regime and lost 9 kilos – a massive physical transformation during this period – unfortunately not long after workshop two Travis had a heart attack and was rushed to hospital – Travis’s father died of a heart incident in his early forties so as expected Travis thought he may have been destined for the same fate.

Common to a lot of people in these situations Travis had a really good look at how he was doing life and decided to make even more changes to align with the person he wants to become in all areas of his life and has since lost even more weight and is looking after himself a lot better.

Travis’s journey was truly inspiring because even though he had a number of major setbacks during his Search 4 Scratch journey he was always open to improving more each day and doing whatever it took to become a better golfer and a better person.

Another great spin off to his journey is that his daughter Rose has taken a liking to golf and has been selected for her state’s development squad – Travis is looking forward to sharing some of the tools he learned from Search 4 Scratch with Rose as they now share this golfing journey together.

See more of Travis’s Search 4 Scratch journey by reading or watching his testimonies below. 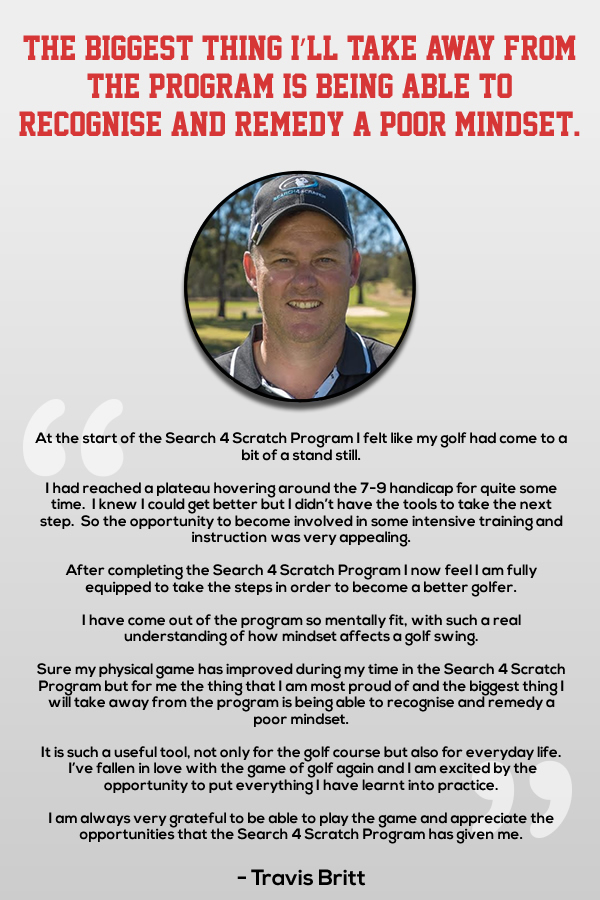