By Search4scratchApril 16, 2017Uncategorized
No Comments

When Search 4 Scratch Documentary student Glen Bell was selected for the Search 4 Scratch Program he thought the opportunity would allow him to get back to scratch and at worst case take what he learns and apply it to his junior program at Blackbutt Golf Club.

Little did Glen know the Search 4 Scratch Program was about to turn his life upside down for good and change his life forever.

When Glen originally applied to be part of the Search 4 Scratch Documentary Creator and CEO of Search 4 Scratch Andrew McCombe thought Glen was too focused on his junior program and not enough on himself (in a way that Andrew thought Glen was actually hiding something else that he did not want to deal with) – with coach Lawrie Montague and Sport Psychologist “DJ’s persuading they decided to give Glen the chance to see how low he could go in 3 months.

Glen started playing golf in his forties and had previously achieved a handicap of +2 but life got in his way and his handicap had dropped back to 5 when he started the program.

He certainly had all the attributes of a great golfer and required minimal intervention from a golf perspective but it soon became evident that it wasn’t his golf that needed the support.

As you may have already seen in the Search 4 Scratch Documentary at www.search4scratchdocumentary.tv from the age of 10 Glen has been dealing with very heavy mental and emotional burdens. So much so that they caused Glen to consider “checking out” on multiple occasions.

As the old saying goes, “when the student is ready the teacher will appear” and the Search 4 Scratch Program provided Glen with the catalyst to make significant changes in his personal life and exorcise these demons for good.

Glen learned to listen to, feel and release many years of trapped emotions stemming from his early childhood – this released a massive weight from Glen’s shoulders both figuratively and literally and also gave him clarity on why he is so drawn to protecting and helping underprivileged children in his community and at his local golf club.

After releasing these burdens Glen also realized he had suppressed (but had now re-awoken) a dream to turn pro and play on the Asian Senior Tour.

Glen is now armed with the tools, strategies and support to make this dream a reality and with the skill he already possesses it is just a matter of time before this dream becomes a reality.

See more of Glen’s Search 4 Scratch journey by reading or watching his testimonies below. 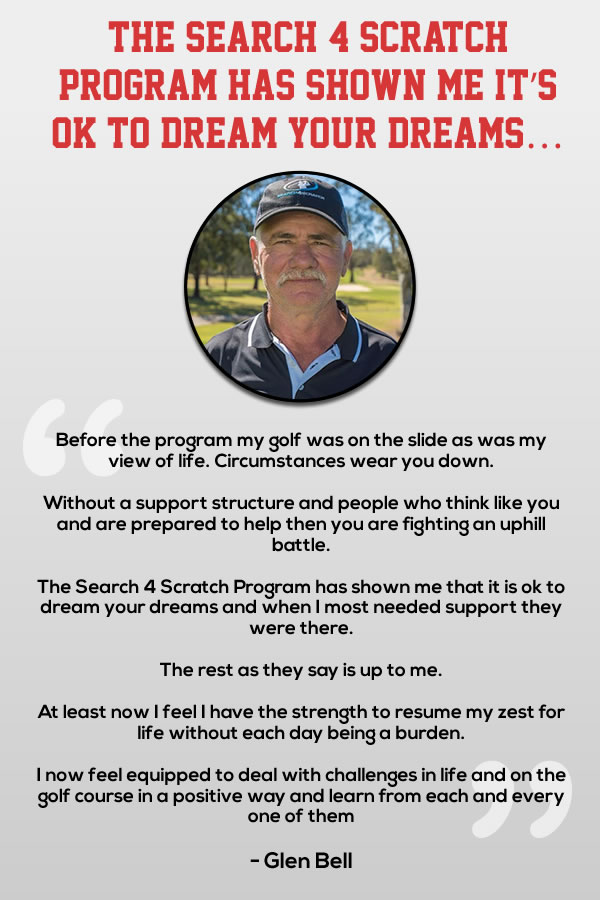