By Search4scratchApril 12, 2017Uncategorized
No Comments

When Search 4 Scratch Documentary student John McLeod was selected for the Search 4 Scratch Program he was desperate to improve his golf and get to scratch – possibly too desperate as his Self-belief, Paralysis by analysis and his Fear of finding out he’s just not good enough were seriously effecting his results.

In john’s own words…”I have harboured dreams of becoming a scratch golfer for many many years. Been back playing for 3 years, managed to get my handicap down from 19, to 4, now out to 5 or 6. I practice nearly every day, have engaged a coach, practice my ass off, but yet, cannot reach the giddy heights of scratch. My true ambition is to get to Q school. I won’t die wondering.”

The problem is I struggle with poor shots, they really get me down, instead of brushing them off and setting up for my next shot, I’ll carry that bad shot with me for the next three holes! Disastrous usually!

They say your game reflects your life – I think my life reflects my game! When I hit the ball well, everything else seems to fall into place. When the wheels fall off my game – other aspects of my existence don’t seem to be too far behind…”

John was a former Scottish Boxing Champion, so he knows how to be successful but the Search 4 Scratch Program helped him realize that golf is not a life and death endeavour and in fact it wasn’t until John actually realized this that he started to improve.

He realized he had been too close to the trees to see the forest (or put simply, he was too fixated on his goal) and had been banging his head against a brick wall in his attempts to improve – not to mention he was very hard on himself when things did not go well – which only effected his results and enjoyment of golf even more.

John has an innate / intuitive (and very powerful) ability to sense and feel his environment around him but this coupled with his extreme anger were not a good match on the golf course – with anger usually winning the day – one missed putt and John would seriously lose it with himself for atleast 3 more holes.

John’s checkered upbringing in Scotland gave reason for the way he berated himself…but he needed a better way, an alternative model from which to do life and golf.

Luckily for John he found it at the Search 4 Scratch Program in so many more ways than he had hoped.

John found a lifelong friend in fellow Search 4 Scratch student Travis Britt, he learned many strategies to deal with his mental and emotional challenges, he cleared many of these challenges and the past issues causing them, he learned an effective course management model that helped him win his Club Championships and he found a new calling in not only wanting to get to scratch but also in helping others do the same.

John’s biggest improvement was learning to use his natural ability in a positive way as opposed to a self loathing, berating way – he is testament to the power of getting out of your own way and allowing life to work with you on and off the golf course.

See more of John’s Search 4 Scratch journey by reading or watching his testimonies below. 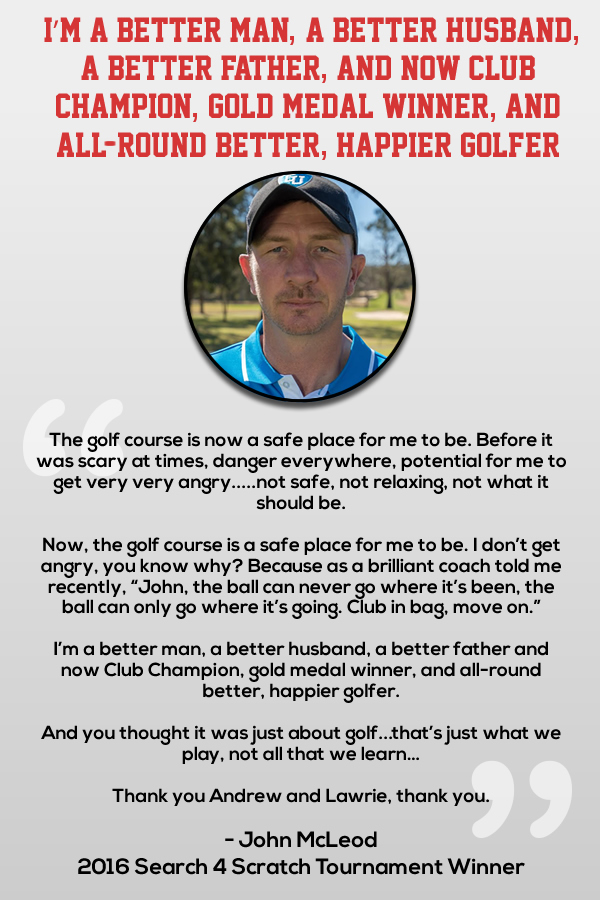