By Search4scratchApril 15, 2017Uncategorized
No Comments

Samantha took up golf in her thirties and even though she is late to the sport compared to most players, she already has the game and the talent to play off a low single figure handicap…except for one thing…

She came into the Search 4 Scratch Program with a severe case of the shanks, which as we all know is enough to put the mockers on any golfer – but true to Samantha’s determination and work ethic it wasn’t long before she began to see them for what they really were and set about rectifying them.

Samantha was the perfect student for the coaches and it wasn’t long before she identified two things that could be causing her shanking challenges.

Firstly she noticed the shanks showed up not long after being fitted for new clubs a year or so ago – very quickly she booked a session to get correctly fitted and that made an instant improvement – for a short time anyway.

Unfortunately the poor fitting that was a co-contributor to the shanks had also left some psychological scarring (as it does with any golfer) and that also needed to be addressed – which she did.

The shanks turned out to be a blessing in disguise for Samantha (as hard as that is to accept – as you wouldn’t wish them upon any golfer) as it allowed her to look at other areas of her life that may not have been in alignment with how she wanted to live life.

As a Human Resources Professional and a busy mother Samantha has always put others first and the Search 4 Scratch Program allowed her to focus on herself for a dedicated period of time – she loved coming to the golf schools during the program, or as she described it “Golf Heaven” as it allowed her an uninterrupted period to focus on her life and her golf.

It was during these periods that Samantha realized that she (and others) were putting too high an expectation on herself (in all areas of her life) and that was leading to a fear of failure and not feeling good enough – thus she would try even harder – which was the opposite of what she really wanted for herself – which was simply to feel good enough for being who she was, free of any expectation, or unnecessary striving.

Once she identified that she wanted to actually chill out and just be in the golf environment as an expression of her own health, wellbeing and passion her shanks began to dissipate and she even played major pennants for her home club – which was another one of her goals.

When Samantha makes herself and her golf a priority in her life the sky is the limit for her.

Samantha literally has the golf swing to compete at a very high level even though she only plays golf 2-4 times per month – proof of this is one week after leaving the Search 4 Scratch Program she hit a 290 metre drive, so armed with her new skills she has acquired at Search 4 Scratch and her incredible ability to learn she will have her low single figure handicap in no time.

See more of Samantha’s Search 4 Scratch journey by reading or watching her testimonies below. 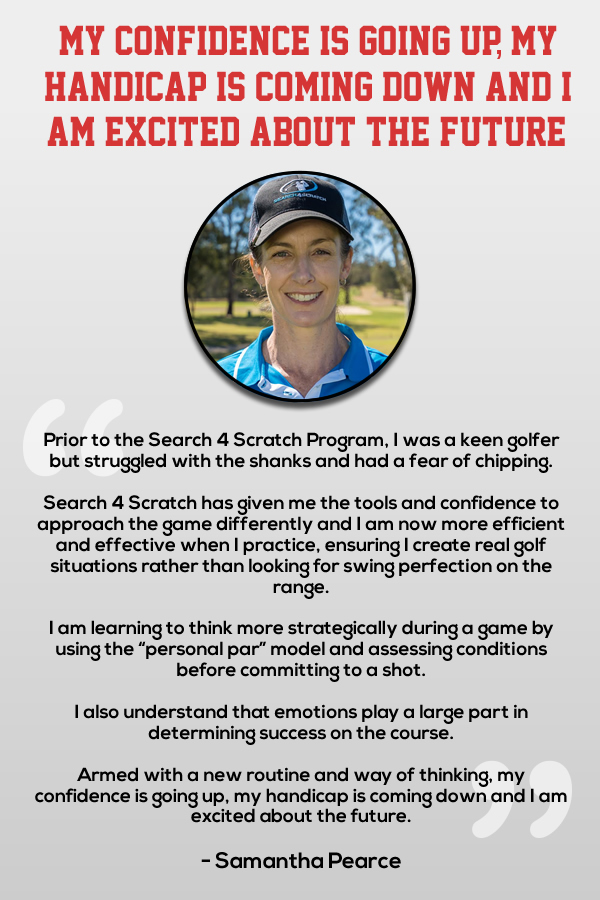